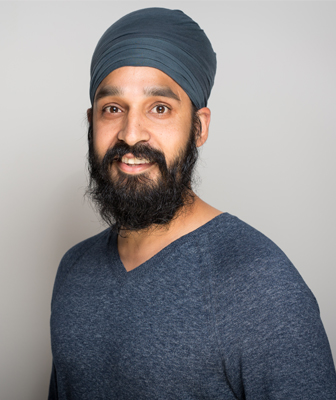 Dr. Simran Jeet Singh is an award-winning educator, writer, activist, and scholar who believes deeply that love, equity, and justice are closely intertwined. He writes and speaks regularly on issues of diversity, inclusion, civil rights, religion, and hate violence, and his thought leadership extends to a number of audiences, from the White House and the Pentagon to university campuses and social justice groups.

Simran is a professor of religion at Trinity University and Senior Religion Fellow for the Sikh Coalition, a civil rights organization based in New York City. This year, Simran serves as the Henry R. Luce Fellow for Religion and International Affairs at NYU’s Center for Religion and Media. He frequently contributes opinion pieces to various news outlets, and he has become a consistent expert for reporters around the world in television, radio, and print media. Simran is also on the board for Religion Newswriters Association, a fellow for the Truman National Security Project, and a term-member with the Council on Foreign Relations.

Simran holds graduate degrees from Harvard University and Columbia University, and he is the author of “Covering Sikhs,” a guidebook to help journalists accurately report on the Sikh community. Simran is currently working on two book projects: one examines Islamophobia at the intersection of race and religion in modern America, and the other focuses on the formative moments of the Sikh tradition and its founder, Guru Nanak. He has taught various courses on culture and religion, including the Muslim, Hindu, Buddhist, and Sikh traditions.

Simran has received various accolades and awards for his teaching and justice work. Most recently he received the prestigious Walter Wink Scholar-Activist from Auburn Seminary, the Presidential Teaching Award from Columbia University, Educator of the Year from the Dialogue Institute of the Southwest, and the Community Pillar Award from the Northside Education Foundation.

Born and raised in San Antonio, Texas, Simran is a diehard Spurs fan and avid marathoner. He currently lives with his wife and daughter in Manhattan, New York.