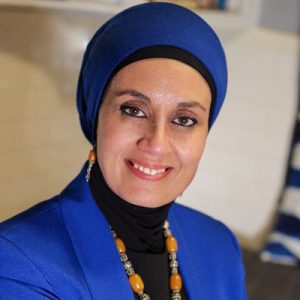 Dr. Debbie Almontaser is an internationally recognized, award-winning educator, speaker and authority on cross cultural understanding. She is an influential community leader and the Founder and CEO of Bridging Cultures Group, Inc.

Dr. Almontaser was the founding and former principal of the Khalil Gibran International Academy in Brooklyn, NY. A twenty-five year veteran of the NYC Public School System, she taught special education, inclusion, trained teachers in literacy, and served as a multicultural specialist and diversity advisor. Currently, she is the Board President of the Muslim Community Network (www.mcnny.org). She frequently lectures, serves on panels, and facilitates teacher and public workshops on cultural diversity, conflict resolution, Arab Culture, Islam, Muslims in America, interfaith coalition building and youth leadership at schools, universities, libraries, museums, faith-based organizations, churches, synagogues, as well as national and international conferences.

Dr. Almontaser was a consultant for CAMBA, a New York based nonprofit, on The Diversity Project. She also served as the consultant and advisor for Nickelodeon’s Nick Jr. Muslim American Series; Independent Production Fund on the Islam Project (producers of Muslims and Muhammad: Legacy of a Prophet PBS Productions); Islam Access Project (Channel 13 WNET); and Educators for Social Responsibility on cultural matters and the Interfaith Center of NYC on religious diversity issues.

Dr. Almontaser co-designed and developed curriculum for the Muslim Communities Project, Columbia University titled “Re-Embracing Diversity in NYC Public Schools: Educational Outreach for Muslim Sensitivity and for Educators for Social Responsibility/Metro, Arab Peoples: Past and Present.” Both curricula engage students to develop interpersonal and intercultural understanding based on respect for ethnic and religious diversity. They also engage students to become culturally sensitive and aware of bias and bigotry and how to combat such behaviors.

A member of the steering committee for A Community of Many Worlds: Arab-Americans at the Museum of the City of New York and on the Advisory Board for the Children’s Museum of Manhattan exhibit, America to Zanzibar: Muslim Cultures Near and Far, Dr. Almontaser’s leadership and expertise are frequently utilized by both public and private organizations.

In 2005, Dr. Almontaser spearheaded the inauguration of Arab Heritage Week in New York City. She is also the “go to person” on cultural and religious diversity issues for Borough President Eric Adams, the Mayor’s office of Immigrant Affairs, New York Police Department and New York City Council members. She also sits on the Public Advocate Tish James’ Jewish, Muslim, and Sikh Task Force to Combat Hate. Dr. Almontaser is a founding board member of The Dialogue Project, Brooklyn Borough President’s New Diversity Task Force and board advisor for the Same Difference Interfaith Alliance. Dr. Almontaser served on the boards of Youth Bridge NY, Women In Islam, Inc., and Saba: The Association of Yemeni Americans. She is a co-founder of Brooklyn Bridges, the September 11th Curriculum Project, We Are All Brooklyn, and Women Against Islamophobia and Racism (WAIR).

Dr. Almontaser was a featured speaker at the 2016 National Democratic Convention and has been featured on the front page of the New York Times and profiled in Time Magazine, Newsweek, NY1 and Daily News.

Dr. Almontaser received a BA from St. Francis College, a MS from Adelphi University and Ed.D from Fordham University. She is a Revson Fellowship Scholar and alumna of Columbia University’s Revson Fellows Program.

Since September 11, Dr. Almontaser and her family have opened their home to people from across the country to have a social exchange that lends itself to developing an understanding of Arabs and Muslims in New York City. She also organized numerous interfaith and cultural events to develop cross-cultural understanding across New York City, such as the Children of Abraham Peace Walk. This work has led to travel in order to share her peace-building work nationally and internationally in Canada, Russia, Jamaica, Costa Rica, Denmark, Netherlands, Qatar, Dubai, Abu Dhabi, Kazakhstan, and Portugal.